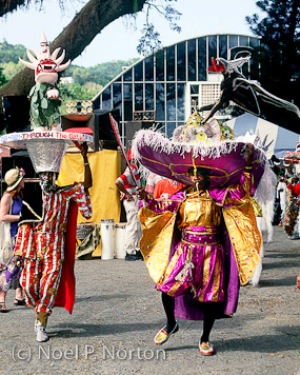 The Midnight Robber is one of the most beloved colourful traditional carnival characters. Midnight Robber, is immediately identifiable by his extravagant costumes and distinctive speech, called “Robber Talk”

The “Robber Talk” is derived from the tradition of the African Griot or storyteller, and the speech patterns and vocabulary are imitative of his former master and is characterised by its boastful, mocking style was derived from a variety of sources: the Bible, literary texts and school readers and speaks of the Robber’s invincible ancestry as well as his terrifying exploits.

Originally inspired by cowboy costumes, the Robber sports an oversize hat with fringed brim, the crown assuming different shapes (graveyard, coffin, The Red House); a flowing cape decorated with symbols of death and destruction; black satin shirt and pantaloons generally in black and shoes or boots resembling an animal with moving eyes. He summons and dismisses his audience with the blow of his whistle while threatening them with a gun, sword or dagger and a wooden money box in the shape of a coffin.