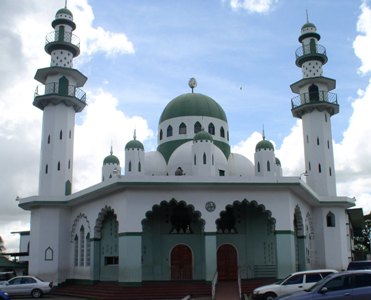 Construction of the Jinnah Memorial Mosque in St. Joseph was completed in 1954. The mosque was named after the founder of Pakistan, Quaid-I-Azam Mohammed Ali Jinnah. The design of the mosque was conceived by the Council of the Trinidad Muslim League in 1948. The Architects were Mence and Moore. The foundation stone was laid by His Excellency Al-Haj Mirza Abdul Hassan Ispahani, Ambassador to Pakistan in the united States of America, in November 1948.

The Main dome of the Jinnah Memorial Mosque is forty feet in diameter and twenty four feet high, standing in the centre of the building surrounded by glass louvres and crowned by the crescent and star.

Four half-domes form a cluster around the main dome, with a door to each, allowing onlookers to enter and view the interior of the great dome and the ground floor below. Six smaller narrow domes capped in green and with needle-like spires stand at the angles of the hexagonal structure.

The beauty of the construction not only reflects the love and devotion ,the will and the determination, the sacrifice and labours of the community which built it, but encourages the previously indifferent to worship.

Excerpts from Temples of Trinidad, The Litho Press, 2004