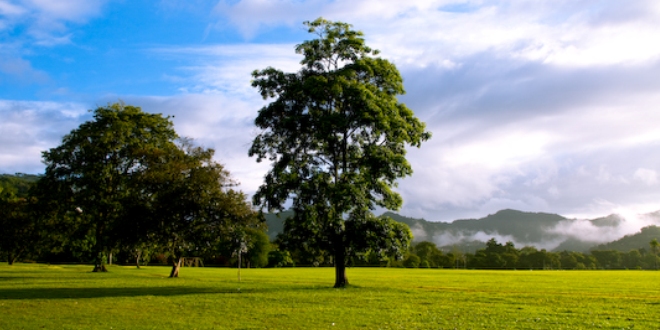 Olga Mavrogordato in her book, Voices in the Street, says: It is not easy to imagine Port of Spain without the Savannah. It plays a very important part in the lives of all of us” and describes it as “the lungs of the city”.

There are misconceptions about the origins of the Savannah or Paradise Estate as it was then known as a public space. It is the popular belief that the estate was a gift from the Peschier family. 232 acres were, however, purchased by the Cabildo on the direction of Sir Ralph Woodford from the Peschier family on 18 August 1817. This did not include “a piece of ground in which the ancestors of the said family Peschier are interred …”. The cemetery is used to this day by descendents of the Pechiers. Called the Grand Savannah, little is known of the early years other than being used for the pasturing of cattle and an open playground, but horse racing was recorded as early as 1828. The Grand Stand was erected in 1854.

The Savannah remains the centre for all forms of sport including cricket, football, hockey and has become the centre for military and Carnival parades, bicycle races, jogging and walks. It also has a history of being the centre for romantic liaisons and vendors selling coconuts and oysters. The Savannah is probably the most hotly defended of Trinidad and Tobago’s natural heritage sites, as structures and car parking facilities – purported to be temporary – encroach on its integrity. A Carnival Centre is planned to replace the Grand Stand, but has received considerable public opposition.

The Savannah is listed as one the biggest parks in the Western Hemisphere and also, by the Guinness Book of Records as the largest “roundabout” in the world.