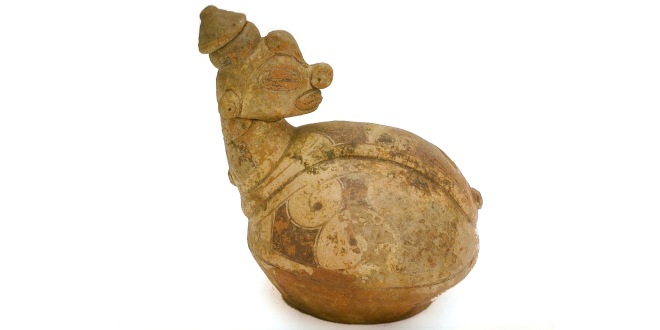 Trinidad and Tobago’s indigenous people were Amerindian. One excellent example of their artistic expression is the Erin Ritual Bottle. This 19 cm diameter bottle with a small conical stopper was found as a burial offering at Erin , a large site in southwest Trinidad. The elaborate decoration suggests that ownership was by the senior cacique. It consists of red designs on a white background, painted negatively. The head likely represents the supreme male sky spirit. As suggested by recent Amazonian ethnography, red and white decoration was connected to the sky world, the male world of secular government. It is probable that the bottle was used for ayahausca, a hallucinogenic drink, which enabled the political leader to consult with his spirit father in the sky.

The vessel paste used for colour is typical of Trinidad’s Palo Seco style (c. AD 0-650), as is the typical white-on-red body decoration. The incised white-on-red treatment on the head, however, mimics the Los Barrancos style of the Lower Orinoco state and is a marker decoration for the Late Palo Seco state (c. AD 350-650). Trinidad leaders were probably drawn from the local elite, but with mothers and wives from the lower Orinoco elite. Both societies were probably matrilineal.

The Central Bank of Trinidad and Tobago, The Art Collection, 2004

The History of Art of Trinidad and Tobago by Geoffrey MacLean