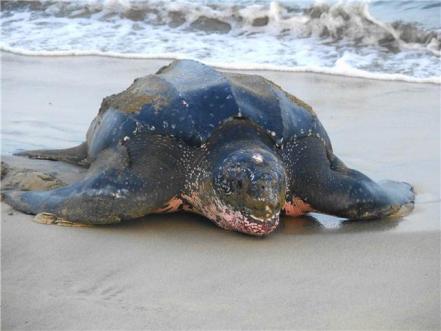 Save Our Sea Turtles

The sea turtle fauna of Trinidad & Tobago is one of the most diverse in the Caribbean.  Three species, the leatherback (Dermochelys coriacea), hawksbill (Eretmochelys imbricata) and the green turtle (Chelonia mydas) nest on the island’s beaches.  Two other species, the loggerhead (Caretta caretta) and the olive ridley (Lepidochelys olivacea) inhabit our coastal waters.

The leatherback population that nests on the island’s beaches is the second largest in the world.  Regularly migrating vast distances between foraging grounds (feeding areas) and nesting beaches. Turtles that nest in Trinidad and Tobago come from widely scattered feeding grounds throughout the Caribbean Sea and Atlantic Ocean.  Satellite tagging of leatherback turtles nesting in Trinidad show that they forage throughout the North Atlantic.

Despite national and international protective legislation, sea turtles face numerous threats to their survival.  All species are endangered at a local level, with the leatherback and hawksbill listed as critically endangered worldwide by the International Union for Conservation of Nature (IUCN).

Turtles continue to be adversely affected by illegal hunting (poaching) of nesting females and their eggs, loss of habitat through coastal development, accidental capture in commercial fishing gear, pollution and boating-relating accidents.

If sea turtles in Trinidad & Tobago and the rest of the wider Caribbean are to survive, it will take serious commitment on the part of Governments, communities and private sector companies.  Communities throughout Trinidad & Tobago in Black Rock, Fishing Pond, Grande Riviere and Matura, are promoting eco-tourism and responsible turtle watching guidelines on nesting beaches, thus reducing the incidents of poaching by placing an economic value on living turtles.

Solutions that require the least amount of manipulation of turtles and their natural behaviour are certain to be the most successful, cost effective and, in many cases possible and already at hand.