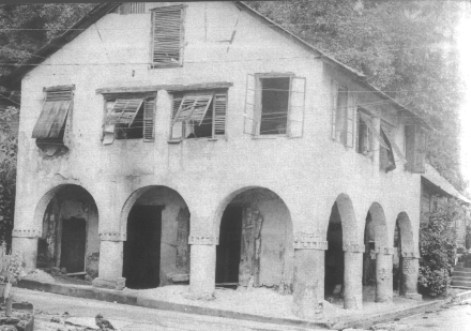 Popularly known as the “Carib House” on Carib Street in San Fernando, the building is a popular landmark on San Fernando Hill. The site was first occupied by a house built in 1832 by Charles Le Cadre. The current structure is thought to have been built by a Barbadian stonemason called Samuel Atherly. Atherly was also responsible for the construction of the San Fernando Court House and Police Station on Harris Promenade (1872-1873). It is incorrectly referred to as being built in Spanish times or pre-1797.

The building was abandoned in the mid-1950’s and “restored” in 1985 by the Borough Council. The ground floor pillars are of brick ballast.