The foundation stone for Governor’s House, now known as President’s House, was laid by Governor Sir Henry Turner Irving, K.C.M.G., in 1876. It was designed by Mr. Ferguson, on the Indian model, and built of native limestone. Construction originally cost £44,630.00.

In 1938 the building was almost completely gutted and re-planned and modernized internally.

In 1962 it became a Museum when Trinidad and Tobago became Independent. It was occupied by the President of the Republic until early in 2010. Part of the western structure recently collapsed and it is hoped that restoration will proceed immediately. 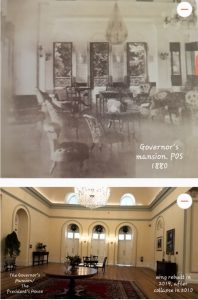