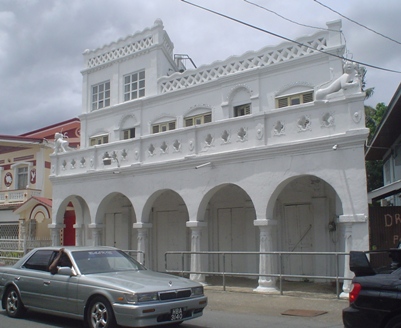 The Lion House, is the ancestral home of the Capildeo family and stands majestically on the Chaguanas Main Road in Chaguanas, a large town half way between Port of Spain and San Fernando. It is the only building of its kind in the Western Hemisphere. Conceived, designed and constructed by the late Pundit Capildeo, it remains a symbol and memorial to the indentured Indian immigrants, one hundred and twenty thousand of whom arrived in Trinidad between 1845 and 1917. It is the story of one indentured immigrant’s success and his bequest to the Nation.

Pundit Capildeo was born in 1873 in his family’s village of Mahadevadubey in the district of Somra, county of Gorakhpur in the state of Uttar Pradash, East Central India. Pundit Capildeo broke the bonds of indentureship and became a highly respected and successful Pundit, ministering to Trinidad’s Hindu community. Over the years he also became a successful landowner, businessman and cane farmer.

In 1924 he began the construction of the Lion House which he completed in 1926 and named it Anand Bhavan or the Mansion of Bliss. That same year, he left on one of his many trips to India. Pundit Capildeo never returned to Trinidad dying during the course of this visit.

“The prototype of the original model on which the edifice was designed, was a city dwelling in the town of Gorakpur, in the county of the same name, from which Capil had emigrated and in which his family had lived, for so many generations. Indeed, the architectural style of the building, like his family, went back centuries.

Its brutally stark pillars forming an arcade in front, plain walls and flat roof, mirror the early Gupta style of the 5th century A.D. Capil constructed the creation with his own hands. It was his very own and yet to some extent he may have envisaged it as his cultural gift to Trinidad from his ancient homeland.

Outstanding in its own right, the house has become internationally famous because of its description in cynical style, by Capil’s grandson Sir Vidiadhar Surajprasad Naipaul, in his book A House for Mr. Biswas, in which he transforms the lions into representations of the monkey-god Hanuman, Capildeo becoming Tulsi and Chaguanas, Arwacas.”

Surendranath Capildeo, Conveyancer and former Member of Parliament, completed the restoration of the Lion House at his sole expense, so that today the public can visit it and see it as it was in 1926. The Lion House has been many things to many people in its early history. It was a meeting place for many travelers from all over Trinidad who were passing through Chaguanas.It was a home for Hindu Pilgrims and an early community centre for the residents of Chaguanas and surrounding areas.

Ganja was sold at the Lion House and it was consumed there by the public without any discomfort to anyone.