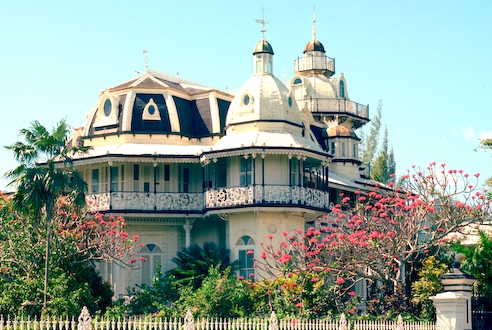 Ambard’s House was constructed by Lucien F. Ambard in 1904 as a family residence.  It was designed by a French architect and the original pattern-book is still available at the Ambard’s House Library.  Most of the materials used in construction were imported, the marble from Italy, the tiles from France and the cast iron elements from Scotland. The wood for the rafters came from an estate in Erin owned by the Ambard family

Because of financial difficulties resulting in an inability to meet his mortgage payments to Gordon Grant & Co., Ambard lost his house in 1919.  It was subsequently sold to Pointz Mackenzie, who also lost it in 1923 under circumstances similar to that of Ambard. In 1925, William Pettigrew Humphrey, an American businessman, rented the house where he lived with his family until 1940, the year that the house was sold to Timothy Roodal.

Today Ambard’s House, or Roomor as it is now more popularly known, is occupied by Roodal’s granddaughter, Dr. Yvonne Morgan and her family. The name Roomor is a combination of two family names, Roodal and Morgan. Ambard’s House, the only one of the Magnificent Seven to remain as a private residence, is almost totally constructed of wood and as such requires constant maintenance. It has however, substantially maintained the integrity of the original design and finishes.