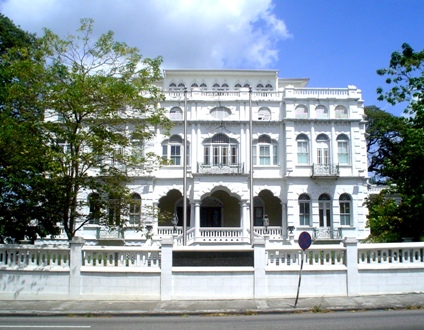 One of the Magnificent Seven, White Hall, as it is known today, was built in 1904 by Joseph Leon Agostini, a cocoa planter, at the time when “cocoa was king”. Construction commenced in 1904, in accordance with Mr. Agostini’s own design, said to be influenced by the Moorish Mediterranean style and reminiscent of the architecture of Corsica from where the Agostini family originated.  Construction took approximately three years, although the roof was not completed until the building changed hands in 1907.   This residence, the largest of the private homes on Maraval Road, was originally called Rosenweg.

One story is that the Agostini family lived at Whitehall for two years after J.L. Agostini’s sudden death in 1906 and remained in residence until 1910. Other sources claim that the Agostinis never lived in the building because they could not afford to complete it, Trinidad’s cocoa industry having suddenly collapsed during the period of construction.  Whichever version is true, the family was unable to meet mortgage payments and the mortgagee, William Gordon Grant, foreclosed. It is said that Leon Agostini can still occasionally be seen, sitting on the porch terrace, lamenting his loss.

The year after Mr. Agostini’s death, the property was sold to Mr. Robert Henderson, an American businessman from Venezuela, who took up residence with his family.  During his ownership, a delightful variety in the furnishings of the interior was added to the refined dignity of the exterior.  Mr. Henderson family renamed it Whitehall after the coral stone from which it is built.

At the beginning of the Second World War, with the arrival of the United States Forces in Trinidad, Whitehall was commandeered from the Seigert family, heirs of Robert Henderson, and occupied as the headquarters of the Air Raid precaution (A.R.P.) from 1940 to 1944. In 1944, the British Council rented and occupied the building as a cultural center.  The Trinidad Central Library, the Regional Library, the National Archives, the Government Broadcasting Unit, the Trinidad Art Society and the Cellar Club all rented or occupied space in the building.  In 1949, the lease to the British Council was not renewed and the building remained empty until the 7 October, 1954, when it was purchased by the Government of Trinidad and Tobago.

In 1957 Whitehall was occupied by the Pre-Federal Interim Government prior to the establishment of the West Indies Federation in 1958. In 1963, it became the Office of the Prime Minister occupied by The Hon. Dr. Eric Williams, Trinidad and Tobago’s first Prime Minister after Independence.

Restored in 2000, Whitehall continued to be occupied by the Office of the Prime Minister of the Republic of Trinidad and Tobago until 2009.