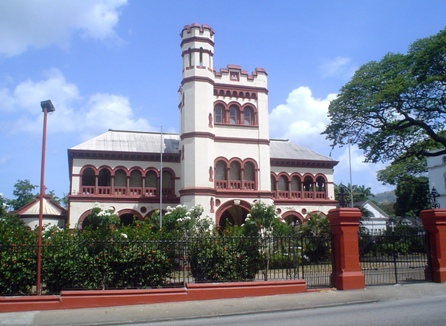 The Archbishop’s Palace was built in 1903 by the fifth Archbishop of Port of Spain, Patrick Vincent Flood, at a time when the wealthy estate-owning French Creoles were building on Maraval Road.  In keeping with the dignity of his office, the Archbishop decided to construct a palatial residence.  The plans for the proposed structure were drawn in Ireland by an Irish architect who obviously had leanings towards the Indian design.  Construction was carried out by George Brown of the Trinidad Trading Company and the building was completed in 1904.

Archbishop’s Palace underwent many changes during 1968 and 1969.  The ground floor was almost completely remodeled and what had been wooden paneled walls became concrete walls with aluminum windows.  Several walls were removed due to the darkness of the interior, as is the case with a screen wall that once divided the entrance hall into two, and the wall that stood behind the stairway. A Chancery was constructed to the west of the main building and the summer house and the stables were torn down and replaced by a new apartment. The first floor of the house, the sacristy, the chapel and a room in the south-west corner of the house, behind the chapel, maintain their original state. The architect for the renovation was Sonny Sellier and the contractor, Rev. Father Kevin Devenish, C. S. Sp. Upon its completion in 1969, Monsignor Anthony Pantin, the first Trinidad-born Archbishop, took up residence at the Archbishop’s Palace, which remains the official residence of the Roman Catholic Archbishop of Port of Spain.

The renovations are not considered to be in keeping with the original architecture although some of the orignal designs have been maintained. In particular, the double wooden doors to the ground floor were replaced by aluminum sliding doors which have destroyed the integrity of the intended aesthetic. The original doors, however, can be found on the south-east corner of the ground floor and on the two plain panels, one below the louvres and one above.   The composition of the windows is also very unusual, as glass is fixed on the wood frame instead of a wooden panel.