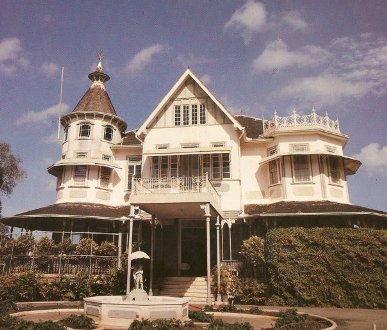 This residence, built by Mrs. Prada as a gift for her husband Dr. Enrique Prada, was the home of the Prada family for 19 years.  The name Mille Fleurs is original, given to the house by Mrs. Prada herself.  The house was built in 1904 by George Brown of the Trinidad Trading Company, under the guidance of Dr. Prada, who had a particular interest in building.  Dr. Prada was a scholar and a public-minded man.  Born in Venezuela in 1867, he came to Trinidad at an early age where he lived until his death in 1944.

In 1923, Mille Fleurs was sold to Joseph Salvatori, from which time it became the residence of the Salvatori family.  After the death of Mr. Salvatori in 1959, Mrs. Salvatori was the sole occupant until her death in 1971.  The mansion subsequently became the property of Mrs. Pierre Lelong, only daughter of Mr. and Mrs. J. Salvatori. Mrs lelong lived in Paris and in 1973 she sold Mille Fleurs to George Matouk.  In June, 1979, the Government of Trinidad and Tobago purchased the house from Mr. Matouk for approximately $1, 000,000.00. The intention was that it would be used as the offices of the National Security Council.

It’s architectural style has been described as French Provincial. Although Mille Fleurs is less ostentatious than some of its neighbours, the quality of finish and detailing is perhaps of a far higher quality: the intricately carved balusters and the marble treads and risers to both the main and secondary staircases; the elaborate cast-iron columns and brackets, etc.

Possibly one of the Magnificent Seven’s most gracious and architecturally refined structures, Mille Fleurs is in an advanced stage of deterioration.  It is at present unoccupied and no consideration is being given to even the most basic maintenance.  The building does not have a future if the present situation continues.