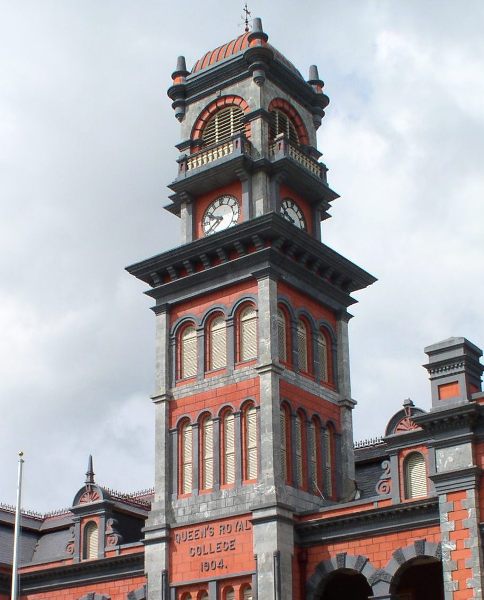 Still regarded as the leading secondary school in education for boys, Queen’s Royal College is situated at the corner of St. Clair Avenue and Maraval Road. The Main Block, so called because it was the first structure on the site, stands majestic, complete with a lighted clock-tower and chiming clock. Queen’s Royal College is considered to be the most striking of the buildings of the Magnificent Seven.

The foundation stone for the building was laid on 11 November 1902, by Sir Courtney Knollys, who was the acting Governor of the day. Daniel M. Hahn designed the structure. Hahn was Chief Draughtsman of the Public Works Department and an old boy of Queen’s Royal College, during the period when the school was housed at the Princes Building.

The architecture of the Main Block is German Renaissance in style, evident by its solid appearance. Constructed at a cost of £15,000, the original building accommodated six classrooms for 30 boys each. The lecture hall could hold over five hundred persons at a time when the student population was less than two hundred.

Notwithstanding the German origin of the plan, a legacy perhaps of Mr Hahn’s student days in Berlin, the design of the interior is very definitely tropical with a delightfully aristocratic touch from the days when European school architecture was austere.

Restoration of Queen’s Royal College is now complete with the original colours retained. During the restoration process paint was carefully stripped from the walls to be able to identify the original colours. Decorative panels to the classrooms were revealed and have been restored in certain selected areas and permanently protected in other areas.