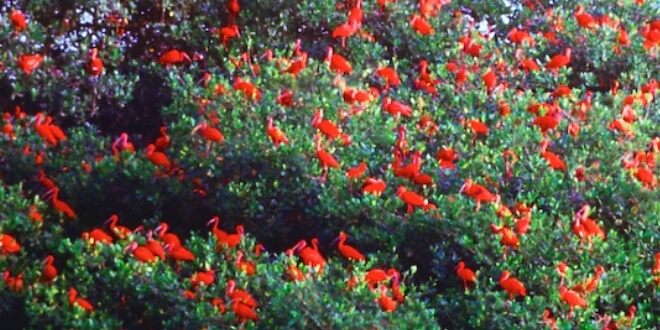 The Caroni Swamp is located at the mouth of the Caroni River, the largest river in Trinidad, on the north west coast of Trinidad on the Gulf of Paria. Large areas of mangrove trees are separated by waterways that can be navigated by small pirogues. The Swamp is known for many different species, including caimans, swamp boas, crabs of different types, herons and egrets, but in particular the Scarlet ibis.

Most of the Ibises feed in Venezuela eleven miles away. Similar to flamingos and reseate spoonbills, the Ibis gets its rich colour from their diet of crab. The Caroni Swamp is a favourite with visitors to Trinidad and Tobago, particularly in the early evening when the flocks of Ibis are returning to roost in the mangroves.

It takes about three years for the Ibis to develop its full colour, remaining a dull grey through adolescence.

Although officially protected, the Scarlet Ibis population is at risk from poaching and pollution of the swamp and Gulf of Paria.