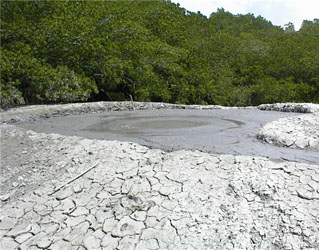 Trinidad is one of the countries that has a preponderance of mud volcanoes. The term is usually given to areas where there is an extrusion of watery mud or clay, often accompanied by hydrocarbon gases. Occasionally these volcanoes extrude material with violent force, throwing rocks hundreds of feet into the air. Commonly the activity of a mud volcano is simply a mild surface upwelling of muddy and usually saline water accompanied by gas bubbles.

These volcanoes are sometimes known locally as “bouffe” (French for swelling), “morne” or “yard.” The original Amerindian inhabitants of Trinidad called these areas “guaico”, meaning “mud-stream”. When the mud is of the dry type, a conical or volcano shape is usually formed. Wet mud tends to result in depressions.

Mud volcanoes are situated at the following places in Trinidad: