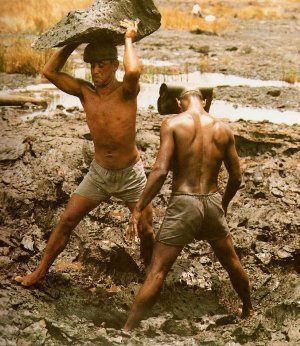 The lake, of natural asphalt, is found in the south-west peninsula of Trinidad. Once thought to be an inexhaustible source of pitch, it has provided Trindiad with a colourful legend.

The origin of the lake, according to legend, was after the sacrifice by the Chayma Indians living in the area, of hundreds of hummingbirds in an attempt to appease the gods. Bedecking themselves in the feathers, their action provoked the gods to such anger that the earth opened to swallow the entire village. This large morass of “piche” remained as a permanent stain.

“Tierra La Brea” as it was called by the Spanish, was visited by Sir Walter Raleigh in 1596, who used the pitch to caulk his ships, claiming that it was better than anything else he had previously used.

The pitch was not marketed commercially until the 1850’s. Trinidad provided the United States with its first paved road, Pennsylvania Avenue in Washington in 1872.