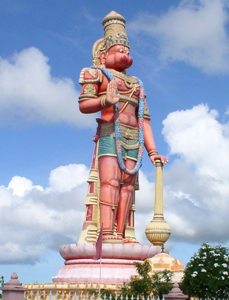 The Dattatreya Mandir in Carapichaima was opened on the 9th June 2003 when the eighty five foot tall Hanuman murti was consecrated and inaugurated as well as a small Hunuman shrine below the statue, the newly built idol of Dattatreya and Anagha Devi, Raja Rajeshwari, Ganapati and Shiva Linga.

The Hanuman murti, the largest outside of India, is built according to the Dravidian style of architecture of South India.

Two grey elephants provide water for devotees to wash their feet before entering the main mandir. At the entrance is a dome with the seven stages of graded architecture, with numerous figures of musicians playing various types of instruments in seven different colours.

The construction of the mandir was carried out by a supervising architect and masons brought from India to do the artwork and to build the Hanuman murti.