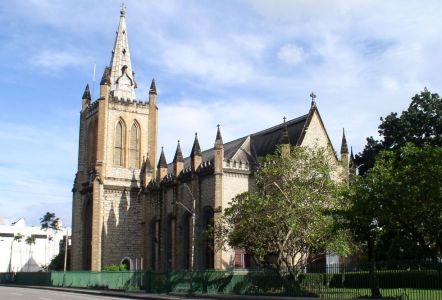 In 1809 the British Parliament gave money to build a new Anglican Church. Construction started with the church situated in the middle of what is now Woodford Square. The new building had progressed as far as the completion of the walls, but because of the public outcry, Governor Sir Ralph Woodford joined in the condemnation and had it pulled down.

New plans were prepared by Philip Reinagle and the cornerstone to the present Cathedral was laid in May 1816. The building was completed in 1818 and consecrated on 30 May 1823.

There were originally six bells beside the clock bell, mounted on wheels and ropes which nobody knew how to ring. Only one of the original bells remains. The bell tower was damaged in the earthquake of 1825 and the bells only replaced in 1881. The present pulpit was originally intended for the Cathedral of the Immaculate Conception, but arrived damaged and rejected. It was later repaired by George de Silva and presented to Holy Trinity Cathedral.

The span of the roof supported by hammer beams of carved mahogany rank high among cathedral roofs in the world. There are six magnificent stained glass windows over the altar. There is a full sized marble statue in memory of and as a tribute to Sir Ralph Woodford

The interior arrangements is now very different to what it was originally, now able to accommodate 1,200 people as opposed to the original 550.