Our Lady of Montserrat Church 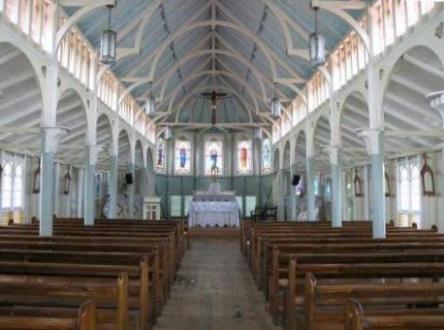 “Our Lady of Montserrat” Roman Catholic Church is located high on a ridge of the Central Range in the village of Tortuga facing westward towards the Gulf of Paria. It is a wooden church, which was built by its first priest and architect, Fr. Marie Jules Dupoux, and blessed on December 24, 1878. The church was named after the Montserrat Hills on which it stands, a name given by the Spanish settlers who named the area after the Montserrat Mountains of Catalonia, in the region of Barcelona region of Spain.

Almost 125 years old and arguably the oldest church in Trinidad and Tobago, the church of Our Lady of Montserrat is also well know as a Shrine to Our Lady. A special festival is held every year on the Sunday nearest to September 8th and is attended by hundreds of patrons from all over Trinidad.

A tradition of pilgrimages developed around Our Lady of Montserrat and the Shrine built to receive the statue of Our Lady found by shepherds among the rocks of Montserrat and brought from Jerusalem via Egypt to Barcelona and iunto the mountains to escape the Moorish invasion. The people of the district revere her and in 1592 the original shrine was expanded into a Basilica and consecrated to her. The statue is affectionately called “La Moreneta” or the Little Madonna and is 37 inches high. The Baby is seated on his Mother’s lap, blessing with his right hand and holding a small fir cone in the left. Our Lady holds an orb in her right hand and protectively touches the shoulder of the Holy Baby with the other. In 1881, Pope Leo XIII crowned Our Lady of Montserrat.

Its first parish priest and architect of our church at Mayo Road, Tortuga, Fr. Marie Jules Dupoux of Avignon, France, designed and built the Church and it was commissioned on December 24, 1878. This church is well known in Trinidad and Tobago for its interesting architecture, the panoramic and breathtaking view of the Gulf of Paria and most of all for the wooden figure of the Black Virgin, built by a Spanish saint maker following the Spanish Colonial Folk Art style. No one knows when the statue was brought to Tortuga and it is assumed that Capuchin missionaries brought it to the parish. The church is also sometimes called the Church of Many Statues because it has statues of some 19 saints donated over the years by the wealthy cocoa plantation owners.

Beautiful stained glass windows, bought in France over 100 years ago adorn the three altars of the church. Also of great historical interest are the hand-painted “Stations of the Cross”, mounted in beautiful frames made of oak.

Today, the restoration of the church building is completed, and a vibrant, hardworking committee, with the assistance of some large donations from overseas and locally has assured that this has been achieved without any debt at a cost of over $800,000.00.

The project was started in May 2001 and the church was to be re-occupied on Sunday September 8th, 2002, the parish festival day.