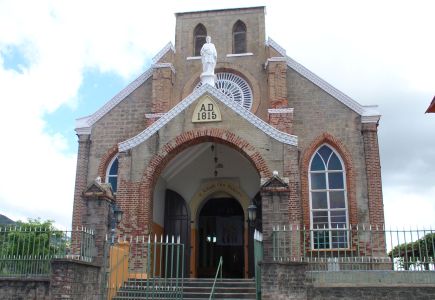 In 1592, Domingo de Vera y Oruna took possession of Trinidad in the name of the King of Spain. St. Joseph was selected as the capital, relatively safe from attack. The governor immediately planned a church on the site of the present church and shortly afterward a small wooden church with a thatched roof was completed and named St. Joseph of Oruna. The small village was subsequently sacked by Sir Walter Raleigh, burned by the Dutch and threatened by the French.

The church was rebuilt in the 1690’s in the original fashion. In 1699 following the Arena massacre of Capuchin Missionaries by the indigenous Indians, their remains were interred in the church and in 1733 those of Bishop de Labride and his two chaplains, similarly massacred in the Orinoco.

The church survived the British conquest, but in 1810 the old building collapsed. Sir Ralph Woodford, the new British Governor, raised sufficient funds to rebuild the church on the original foundations. The structure was virtually complete by 1817 and is now considered to be Trinidad’s oldest church. In 1878, Abbé Orsini, the old building being too small for the growing congregation, began enlarging the church. By 1882, the church was virtually completely and consecrated after all debts had been paid, in 1913, virtually one hundred years after construction commenced.

Excerpts from Temples of Trinidad